When Tania made her first videos she loved balloons. She told me when she was younger she would often pop balloons at parties but did not know there was a fetish for balloons. In her first videos Tania had so much fun popping all of the balloons in every way she could think of including blowing them up to pop. She is such a natural with balloons and as she has popped more and more she understands the fetish, she loves the anticipation before the pop, does some of the best blow to pops I have seen and is amazingly sexy with balloons. She is also an aggressive destroyer of inflatables and has killed them in every way possible, she loves the rush, the smell and the sound they make. I love to make videos with Tania. Her favorite popping method is blow to pop and loves to destroy inflatables by stomping on them with heels. 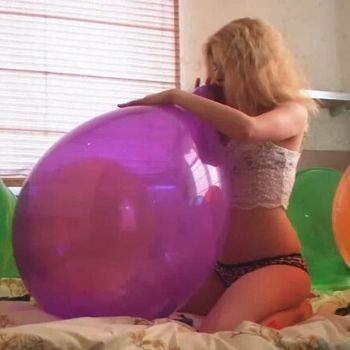 Tania and her amazing transparent blow to pop

Tania and darts and green balloons

Mass blow to pop by Elena Tania and Mishel

Balloon game 10 from 10 by Tania and Elena

Mass blow to pop by Elena Tania and Mishel

24 inch b2p by tania and elena